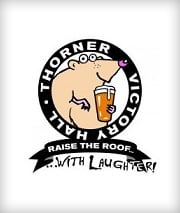 PLP are proud sponsors of Thorner Comedy Festival 2012, raising money for facilities for local charities and the Kenyan Orphanage Project.

Friday 24th February 2012
Tom Deacon - Winner of Chortle Student Comedian 2007. He has his own show on Radio 1 on Sunday nights after the chart show. Regular on Never Mind the Buzzcocks. He'd like to be honest with you, if you're ready for it.

Pappy's Sketch Comedy - A 3 man sketch troupe who were nominated for the Edinburgh Comedy Award in 2007, won a Chortle Award in 2008. They have appeared in their own shows on Channel 4 and Radio 4 and have completed their 5th year at the Edinburgh fringe, where they earned a string of 4 and 5 star reviews.

" No one plies silliness as well as Pappys" - the Telegraph

"...the funniest sketch troupe on the fringe"... Scotsman

Seann Walsh - regular on "Mock the Week", "Have I Got News For You", "8 Out of 10 Cats" ,Michael McIntyre's Roadshow etc

"A solid gagsmith with a disarming presence" -The Independent

"...a name to watch. If he can keep picking out those little bits of life that we all know about and delivering them in his dry style, he have audiences in stitches for years to come" - Comedy Central

"Elevating the most everyday occurrence into a grand anecdote and celebrating petty triumphs as magnificent victories." - Chortle

Sara Pascoe - Comedian and actor. Several Edinburgh festival shows and appearances on TV series Campus, The Thick of It, Free Agents and The Increasingly Poor Decisions of Todd Margaret

Tom Stade - Making a return visit to Thorner following his success here in 2008.Co-star and co-writer of Frankie Boyle's Tramadol Nights (Ch4), on Michael McIntyre's Comedy Roadshow (BBC One), Live at the Apollo, Have I got News for You One Night Stand (Dave) & Stand-Up For The Week (Ch4). He wowed audiences around the country in an Autumn tour in 2011. His magnetic stage presence, irrepressible charm and first-class story telling have established him as one of the most sought after performers on the UK and international circuit.

"one of the best practitioners of stand-up we've got...stand-up elite"- Chortle