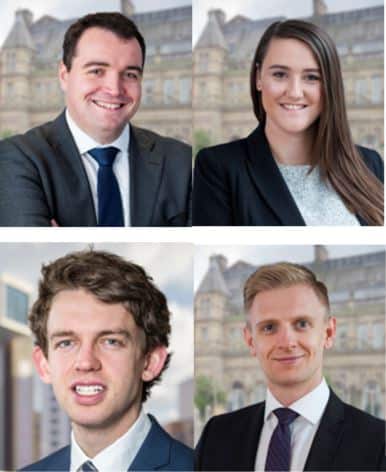 Chambers is delighted to welcome 4 new tenants following successful completion of their pupillages.

Chambers have further expanded their teams by welcoming the highest number of pupils as tenants, following the successful completion of their pupillages.

Iain and Rebecca now join the family team, Tom and Robert are a welcome addition to the Civil Employment and commercial teams.

Prior to commencing pupillage in 2017, Iain worked as a paralegal in Competition Litigation for a leading law firm. Whilst studying for the Bar, he was awarded the Hardwicke Entrance Award by Lincoln’s Inn and received the Professor Miryana Nesic Memorial Prize from Nottingham Law School.

Rebecca was awarded the Astbury Scholarship by Middle Temple to pursue her legal studies, and worked as a volunteer for the National Centre for Domestic Violence whilst studying for the Bar prior to commencing pupillage in 2016. Rebecca also worked as a member for the Family Justice Young People’s Board (FJYPB), previously Cafcass Young People’s Board from 2006 until commencing pupillage in 2016.

Before commencing his pupillage, Tom completed his Bar school training part-time whilst working as a paralegal at two top-tier, national law firms over the course of two years. Tom acts on behalf of Claimants and Defendants, and is experienced in conducting MOJ Stage 3 hearings, Small Claims hearings, applications (Fast Track and Multi Track), and Costs and Case Management Conferences.

During Roberts pupillage, he was supervised by Dominic Bayne and from January 2017, Mark Thomas. Robert was exposed to a wide variety of legal areas, drafting advice in chancery disputes and developing a strong grounding in unfair dismissal and discrimination claims. Under Mark Thomas’ supervision, Robert focused upon personal injury law, including Highways Act, employers’ liability and occupiers liability claims.