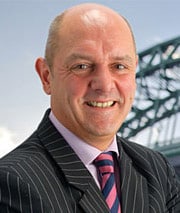 Chambers is pleased to announce that Chris Williams has been elected as Head of Chambers. Chris takes over from Andrew Axon who has held the role since 2012.

Chris was called to the Bar in 1981 and practices exclusively in the field of personal injury and clinical negligence law. He is a popular figure both on and off the North Eastern Circuit, and has sat as a Recorder since 2000.

On his appointment, Chris said: "As Parklane Plowden approaches the 10 year anniversary of its formation, I am delighted to take the reins from Andrew as Head of Chambers. We have enjoyed unparalleled success in Personal Injury, Clinical Negligence, Employment and Family under Andrew's stewardship operating from both Leeds and Newcastle.

I salute him and I am honoured to be charged with overseeing alongside the executive team, the next phase of Chambers' development. We are committed to pursuing excellence in all we do, and the services we provide with a clerking and administration team in support who have no equal."